THE MINT JULEP AT THE GREENBRIER

Exactly when someone decided to add mint to sugar, water, bourbon and ice and call this concoction a “Mint Julep” is anybody’s guess but it seems pretty clear that the drink began to appear in the southern states in the early 19th century.   Despite Kentucky’s determined claims to ownership, it is more likely that the combination began in an older state, say, Virginia and White Sulphur Springs (now The Greenbrier located in West Virginia) was very much the center of southern summer social life well before the Civil War.

The oldest account book at The Greenbrier dates from 1816 and it reveals that guests order “julips” at a cost of twenty-five cents per drink or three drinks for fifty cents.  These were not necessarily the most popular drinks since there was plenty of brandy, wine and whiskey available, but certain guests seemed to have a definite fondness for them.  It seems quite possible that these drinks were served as soon as the first tavern opened on the resort property in 1808.

The first mention of a “mint julep” at The Greenbrier is in the 1832 journal of the well-known Baltimore lawyer John H.B. Latrobe.  A particularly observant traveler, Latrobe noted, “I saw here for the first time a hailstorm, that is to say, a mint julep made with a hailstorm around it.  The drink is manufactured pretty much as usual,” he reported, “and well filled with a quantity of ice chopped in small pieces, which is then put in shape of a fillet around the outside of the tumbler where it adheres like a ring of rock candy and forms an external icy application to your lower lip as you drink it, while the ice within the glass presses against your upper lip.  It is nectar, they say, in this part of the country.”

When the popular writer Charles Dudley Warner described White Sulphur Springs in 1886 he noted that immediately upon arrival a traveler was met by attendants “who avowed that there was no time of day or night when a mint julep or any other necessity of life would not be forthcoming at a moment’s warning.”  As Warner continued his tour of the property he noticed that in the lower level of the hotel was “a barroom not absolutely deserted and cheerless at any hour.”

By 1914—the first full year that The Greenbrier Hotel was open—the mint julep was such a staple that a recipe for the drink appeared on the resort’s souvenir calendar.  Of course it has long been a tradition that a mint julep be served in a silver cup and for many years The Greenbrier utilized custom-designed service cups in the popular watering spot, the Old White Lounge.

For almost two hundred years the mint julep has been a staple at the grand banquets, lawn parties, formal balls, horse shows, and political gatherings at White Sulphur Springs.  No self-respecting Southern politician visiting the resort in the 19th century—epitomized by Henry Clay of Kentucky who was a frequent guest—would let a visit pass without sharing a few mint juleps with the influential planters, judges and lawyers who annually spent their summers at White Sulphur Springs. 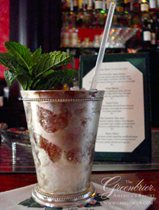